You can also check my 50scenes prompt table for my Tezuka/Fuji fics.

The list will be updated every once in a while whenever I remember to.
Oh, and some of you might already know, I am a comment-addict. so if you happen to read any of my fics, please leave your comment, ne?
that will make me happy ^_________^

Umm, hello all.
I thought since I posted part 1-6 in here before, I will also post the long-overdue final part here. :")

a1y_puff
Fandom: D.Gray-Man
Pairing: Kanda/Allen
Genre: Fluff/Angst and a bit of attempted humor.
Summary: "So are we going to talk about it before you leaving?" Thinking back, Allen kind of wanted to smack himself for even saying magical three words. "Could you do me a favor and pretend it never happened?"
Word Count:~7000
Warning: AU. Possible OOC-ness. Switching POVs
Disclaimer: DGM not mine. AND YAY FOR NEW ANIME SEASON <3
Beta:

End Note: I don't know how many of you still read this fic over here at LiveJournal, but I want to use this chance to also thank all of you who have been supporting me and this fic since the first chapter. All your comments on the previous chapters really meant a lot, so thank you! If you're reading this, kindly let me know what you think, or if you just want to say hi, that''s okay too. I missed you all <3
Also, since DGM is getting a new season, I'll probably write more this year. :)

Hello dearies, sorry for disappearing (again) for so long =))

Anyways. Today I a bringing a happy news (at least for me XD). After a long time of 'retiring' from publishing books, I am back to the publishing world! Though now I somehow found myself in the horror genre. But yes. I have a new book coming soon!! Yay!

The title is "Apartemen Berhantu" or in English, "The Haunted Apartment". To be honest I don't really like the title. I originally called it "Phantasmata", a pluural form of "Phantasma". It means:
1. an apparition or specter.
2. a creation of the imagination or fancy; fantasy.
3. a mental image or representation of a real object.
4. an illusory likeness of something.
But anyway, I guess they want a local title, and one that will not give away the plot. Although the current title makes it sound so cliche, but I hope it would still sell well... The promotion program is kid of good though.

This will be part of a series called "Seri Takut" or "Scary Series" (I guess). Kind of like Goosebumps. But in this series, there are more than one author. For the first season, four are participating, including myself. 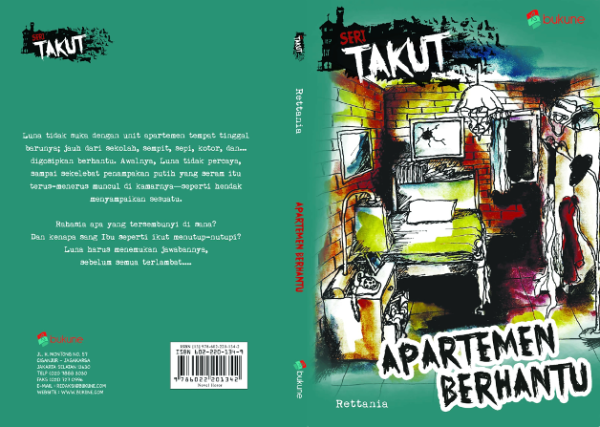 It will be on sale starting the end of this month! I am now planning a book trailer for this, hoping to make it interesting enough so people would want to buy this. Wish me luck! :D

This is all from me now. How have you guys been doing? :)

Title: Late Night, by the Windowsill
Fandom: D.Gray-Man
Characters: Allen Walker, Neah, Yuu Kanda
Rating: G
Word Count: 999
Day/Theme: 10/Picture of Yourself
Summary:  “I’m here to fucking kill you when the time comes,” because that is his promise—his part of the deal. It was the reason he took up his innocence once more—why he traded the freedom Allen Walker had given him, so he could return the favor. That is his reason to go on.
A/N: LAST SUBMISSION for Celeng 10 Hari Kreatif Bersama Tante-Tante Fujo! I ain’t losin’ this thing, yo! Anyways, this happens in the same universe as THIS fic in the timeline of somewhere before it began. I am still playing with this idea and will definitely expand it :D Hope you enjoy!

Title: Dream Scape
Rating: G
Word Count: 890
Day/Theme: 9/Songs
Summary: He doesn't know why he's here, or how long he has been here. It feels like forever. Like a dream.
A/N: Ninth submission of Celeng 10 Hari Kreatif Bersama Tante-Tante Fujo. I hope I am early enough to not lose! Anyways not beta-read, kind of inspired by "Dream Scape" by FictionJunction. This is written for

nherizu becuse it's her birthday!! HAPPY BIRTHDAY NEL! I know this isn't much, probably not even my best piece, but I hope you enjoy anyway :)

Title: (Not) A Beautiful Mess
Fandom: D.Gray-Man
Characters: Kanda, Lavi, Allen-Neah, Lenalee (Somewhat OT4-ish)
Rating: G
Word Count: 998
Day/Theme: 7/Books
Summary: Lavi claims himself Bookman, Allen alternates between himself and Neah, Kanda presses Mugen against Allen’s neck when he does that, and Lenalee doesn’t like any of these.
A/N: The story wrote itself. IDEK. Takes place somewhere in the future of current chapters. Somehow got around the theme, if a little far-reaching. Written for

nherizu who asked for Laven/lavilena (but this is not what it turned out to be, sorry). Hope you enjoy!

Title: The Black Hole Beansprout
Fandom: D.Gray-Man
Characters: Yuu Kanda, Allen Walker
Rating: G
Word Count: 992
Day/Theme: 6/Foods
Summary: Despite the months he has spent rooming with Allen Walker, there is still one thing which fascinates Kanda about this bean sprout of a roommate.
A/N: Day  6 submission of the Celeng 10 Hari Bersama Tante-Tante Fujo. This challenge from hell is getting serious, I swear. Anyways, this one is YULLEN hell yeah! Take place in the “Days Passing By” universe, some time between chapter 5 and 6. And yes, I still remember that fic. I am still willing to finish it. Just gimme some time >__>

Title: On a Fine Day
Rating: G
Word Count: 991
Day/Theme: 5/Places to Go
Summary: I don’t want to be bound yet. I like my freedom. I like living on the streets and going to places. Or maybe, I just haven’t found my human.
A/N: Day 5 submission of the 10 Days Challenge. IDEK what this is, but I do hope you enjoy :)

Title: The Dream House
Rating: G
Word Count: 992
Day/Theme: 4/Want
Summary: "You know what my dream house is like? A house made of wood, surrounded by greeneries and nature. It doesn’t even have to be big, but it would be nice if it has a lot of windows."
A/N: Fourth submission of the 10 days challenge. Certainly not set in the modern world. I'm kind of thinking an RPG-like setting, actually. I've no idea where I got this idea from. The first idea that came to me for this theme was a little too complicated and depressing, and then this hit me out of nowhere. So yeah, enjoy? Do let me know what you think :)